Wow! Many hands made light work. We had more than 30 people show up to help make our school look amazing!  Thanks everyone for a great effort on Sunday morning. Please read on for all the details!

Super big thanks to Clint and Amy Fear for finishing the breezeway toilets, such a brilliant effort.  Blue and Green: lets keep them clean….

Thanks to John Alonso, Nic Alonso and Rachel Shanks for blitzing the sensory garden and also to big boys; Kev, Justin and John for relocating the rocks!

Good job Ricky Colliver, his boys Max and Will and, Magenta for sweeping and shovelling the east fence car park path.

Also to weed buff Lorraine Gaskell and her little helpers Mia and Georgia.

Thanks Andy Ward for sweeping and shoveling the south portion of the yard and inspecting the drains.  Nice job Justin on taming the fruit trees south of the Library. Great work to Guy and Anthea Williams for tackling the STEM room. Thanks to Jenna King for her delicious morning treats!

Thanks again to Shaun Davies for using his dingo digger to shift the mulch around to the Gaga trees and to ‘Mulch Master’ Darren Burke for finishing its distribution with a little help from Lucie. Good job Tammy Burke and Ava for tidying the Hall alley for the second year running.

Thanks also to Pearl’s Dad Peter and Pearl for helping in the veggie garden and protecting the west oval plantings. Nice work Julie Penfold on supplying snacks and fruit and for all the shovelling and the great pictures with her helpers Adam and Eliza.

Well done Owen and Curtis and Alex for weeding and tidying. Thanks Adrian and young Vianne for taking all our weeding rubbish away.

Great effort Kev McCoughtry on the whipper snipper from the cricket nets to the school fence to the BER! Good job Kate for doing a little bit of everything!!!! 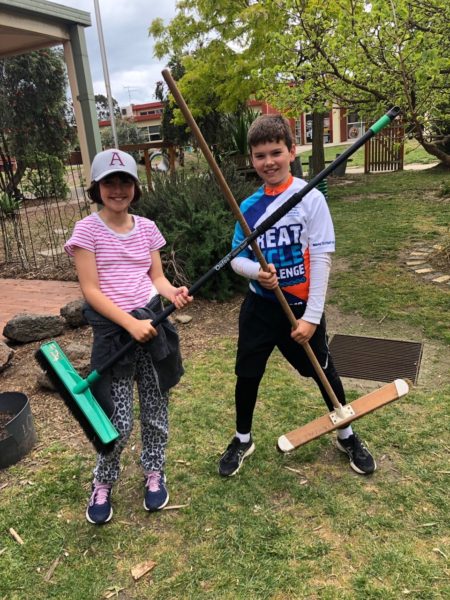